Rubies have been prized above other stones for thousands of year, across various ancient cultures. Ruby stimulates deep understanding and attainment of the heart’s wishes. It also provides a very strong shield of protection for the mind. 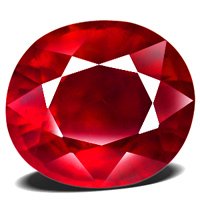 Folklore and Mythology of Ruby

Ruby was said to symbolize one’s rise from martyrdom, helping people release suffering. In ancient cultures it was used in “casting” to predict the future and aid in deceision making. Ruby was traditionally carried to protect against lightening and bad dreams. Hindus beleived ruby to be the king of all gemstones. It was said that there was a light and a heat inside the ruby that could not be conceiled and would even show through clothing. If dropped into the water, its energy would be transferred and make the water boil. In the Christian Bible it is said that Christ requested that Aaron wear a ruby around his neck for protection.

Ruby has been useful in the treatment of fever and heart disease. It can aid the foriming of the enbryo in pregnancy and counteract stimulants such as coffee, drugs or other toxins.