Moldavite is a very special and unusual gemstone.  Unlike the majority of crystaline gemstones that are formed inside the earth, moldavite is believed to have been formed by the impact of metiorites. 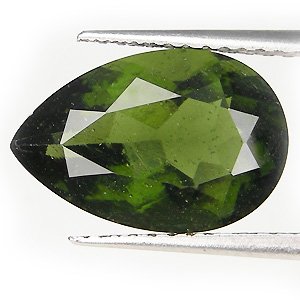 Most moldavite is found in the Czech Republic, the result of the crater that hit the earth 15 million years ago in a place called Nordlinger Reis.  The extreme heat and pressure created by the meteorite’s impact on the earth melted nearby materials on the earth’s surface which were then spewn into the air and cooled.

Moldavite has a glassy appearance and is characterised by visible gass bubbles.  It comes in shades of dull, dark olive green and is rare in large sizes. Because of its cosmic origins, it has been praised and valued for special other-worldy powers.