Garnet extracts negative energy from the body and promotes health.  It is a powerful stone for putting “force” behind creativity that leads to action and results.  Garnet aids in the process of self-discovery by integrating one’s experiences and emotions with the intellect.  When worn or carried, garnet can provide protection and vitality.
Garnet has been called the “Stone of Commitment.”  It facilitates loyalty and comitment both in relationships and to tasks. 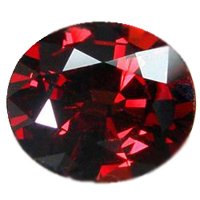 Garnet has been used for thousands of years by the native american, aztec and african tribal cultures.

Garnet is the birthstone for the month of January.

Healing Properties of Garnet:
Garnet can treat disorders of the heart, lungs, spine and spinal fluid, cells, bone and blood.  It has been used to balance sexual energies and repair and protect DNA/RNA structure.  It helps to regenerate the body.